Here you are, minding your own freaking business in your bad-a ... hem, dungeon, when your baddie buddies tell you that there's a bunch of goodie two-shoes adventurers coming to steal your gold! Good thing you know a curse or two you can throw at them.

Type the words above the heads of the goodies to attack them.  You can also supercharge your attacks by powering up one of your baddies in the Monster Pen with the word above their head, then follow it up with an attack on a good guy. They will sometimes drop gold of their own, or even a Curse Sword, which can be picked up to string together a powerful Curse that will destroy everyone in your dungeon when it's typed.

Warning: contains PG-13 language which may not be suitable for young children.

The Goodies come down the screen to take your treasure, and have a word showing above their head. Some move fast and can be killed easily, while others are slow moving and may take multiple attacks to be killed (although they are stunned briefly after a successful attack). The strongest will take three hits to destroy, but you can hasten this with Baddie attacks.

Your Baddies hang out in the Monster Pen at the bottom of the screen, and you'll see one at the ready with a word above their head, just like the Goodies have. When you type this word, instead of being killed, the Baddie is activated and if you make a successful attack without any mistakes, it will kill any enemy outright. A useful strategy is to take advantage of a lull between attacks to load up a Baddie for the next one to come down.

Swords will randomly drop after successfully killing a Goodie, and can be collected by typing the word above it (but hurry, they disappear quickly).   Successive kills without typos add to your Streak, which increases the chance of dropping a Sword.  Each collected sword builds towards a chained "Curse Sword" attack. You can see the progress on your Curse in the lower right corner of the screen, with a word lighting up each time you collect a sword. Once you have completed all of the words, the text will turn yellow to indicate it's ready to use. Typing the full phrase without mistakes will cast a curse that destroys every Goodie on the screen!

If you let any Goodies get too far, they'll steal your treasure, leaving behind open chests. Once all of your chests are gone, it’s Game Over, so guard them carefully! Goodies will sometimes drop coins which can be picked up (by typing the word) to fill your treasure back up, and even accumulate some profit.

Post-Jam Update 8/29/2020: fixed bug when multiple words are on the screen at the same time with the same starting letter; many balance updates; small visual tweaks

Big problem I had when things started getting hectic (120+) is that sometimes I'd go to type a word—let's say "frack"—and it wouldn't register me typing that word. Why? Because "fudge" (another word that starts with 'F') was somewhere else on the screen, thus ending my streak and making me increasingly frustrated. It feels like a coin flip at that point as to whether or not it picks the word I want, and after losing too many in a row it cascades. At one point I was desperate to get 2 more swords so I could clear the screen, and one dropped on the ground. It had the word "raspberries". I went to type it... turns out an enemy had the exact same word, and it prioritized them over the sword.

Hello and thanks for playing my game! I've just uploaded a new version of the game that fixes the above bug, as well as introduces some balance changes that should make the game much more fun! Please give it another try!

Later stages are much better now! I see you don't spawn anything with the same letter, however the monster pen can still have a word that starts with the same letter. After your changes I got 825 kills, 59 treasure, and 37 max streak. After a certain point in the game, you start only killing enemies to get the sword drops, and then clear the screen. You might want to lower the rate of sword drops, because that's what carried me past 300 kills.

94 Kills, 10 max streak :D
ive only played like 1-2 of these type games sofar and didnt like them as much. But this one is nice cause it has also the strategical elements. sometimes u will let an enemy passthrough to take the powerup fast enough..
But can be more challenging as a non native english speaker i guess, a more readable font could have helped.

Thanks for playing and for the feedback! My personal high score is 155, but obviously I've played it quite a lot! 94 is very very good! You're quite correct that it's often better to take a power up. If I can get a coin with one word but it would take two words to kill an enemy, I might as well take the coin and have time left over. Swords are of course priority #1 since they're the only way to clear a screen at the height of a wave.

We're working on the font and should have an update out after the jam is complete to address it; thank you for the input! 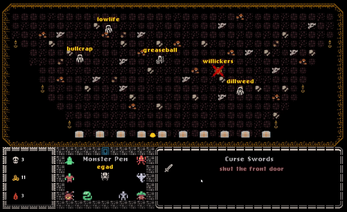